After decades during which public and policy attention waxed and waned, the emerging climate catastrophe at last appears to have taken hold of the agenda, with ambitious announcements from the EU, China and the US in recent months. However, the debate still focuses almost exclusively on CO2 emissions from fossil fuel use.

There is no doubt that tackling fossil energy is critical, but the neglect of food and agriculture in the strategies for a sustainable future is very worrying. Agriculture and food are the second largest source of greenhouse gas emissions – making up around 30% of the global total - but more importantly are the single biggest driver of biodiversity loss. Agriculture also consumes some 70% of all water and largely determines what happens to soils – arguably our most fundamental form of natural capital.

“ On current trends agriculture and food systems look like the epicentre of a perfect storm of demographics, economic change, consumption and climate change.”

Agriculture thus plays a decisive role for natural capital, but there is more to it. Agriculture, climate change, natural capital, economic transformation and demographics are part of a larger system. Outcomes are determined by the multiple feedback loops between the components, rather than the individual elements. And, if left unchecked, the current trends in demographics, structural economic change and consumption patterns seem on course for a profound environmental and social crisis.

Agricultural output tripled from 1961 to 2015 – the “Green Revolution” – while greenhouse gas emissions from agriculture doubled. As per capita incomes increased, demand for animal protein has surged, and today most agricultural land is taken up to produce animal protein, including 45% of all grain. Meanwhile, biofuels have been expanding fast.

This rapid expansion of agricultural land is the main driver for deforestation. Half the original forests of the world are gone. While land grabbing in developing countries has been expanding to secure food and biofuels for rich ones, food waste has assumed massive proportions. An estimated 1.3 gigatons – a stunning 30% of total production – go to waste. If food waste was a country, the 3.3 gigatons of GHG linked to it would make it the third largest emitter after the United States and China. The carbon losses expected from 2010-2050 from poor management of agricultural soils alone are upwards of 80 gigatons, equivalent to between a quarter and half the CO2 budget still available to stay under 2oC.

The demise of the world's biggest employer?

In a global workforce of some 3.5 billion, agriculture is still the single biggest employer. According to the ILO, over 880 million people work in agriculture, more than 1 in 4. Most of these workers are members of the 400 million farmer families around the world. In spite of their typically small holdings, they produce some 80% of the food consumed in developing countries.

Nevertheless, the share of workers in agriculture has been falling around the world. In OECD countries it is 5%, in the US as low as 1%. This is considered part of the standard pathway to economic development: move workers out of relatively unproductive agricultural work into more productive sectors, ideally industry.

At first glance, this shift looks desirable from a social perspective. Three quarters of the farm holdings in the world are smaller than 1 hectare, with almost 80% of the world´s poor living in rural areas, most depending on agriculture for a living. Worse, productivity in agriculture lacks far behind that in services, let alone industry. In high-income countries value added per worker is half that in services. In South Asia and Sub-Saharan Africa it is a third.

But is such a shift even possible in low-income countries where agriculture still employs 59% of all workers?

A roadblock to development

Global population growth has begun to slow, but is still expected to take the total to 10 billion by the end of the century. This growth will be heavily concentrated in Sub-Saharan Africa and South Asia. This implies workforce growth doubling every 35 years in South Asia and every 23 years in Africa. India´s labor market for example needs to create 10 million new jobs per year just to absorb the young people seeking jobs. Coincidentally, these are the two regions where agriculture still employs over 500 million, more than 1 in 2 in Africa and 2 in 5 in South Asia.

Dani Rodrick observed in 2015 that most developing and emerging economies are experiencing what he called premature de-industrialization. The share of industry in the economy is falling both in terms of employment and contribution to GDP before it ever reached anywhere near the levels observed in today´s rich countries. Looking at the transition for youth, Louise Fox and FAO find that the shift is to low-productivity services in the informal economy, not to high value-added activity which would lift families out of poverty and boost national economic growth.

Bad, and probably getting worse

For the time being, agriculture still continues to absorb labour in Africa and has not started to shed massively in South Asia. But that could change. The IPCC expects consistent negative impacts from climate change on agriculture in the tropics. Increasing heat will not only affect crops but also reduce the productivity of agricultural workers. Even a 1.5oC scenario would cost 4-5% of value added in South Asia and West Africa. Combined, that is the output of nearly 50 million workers lost.

“ Some experts and the agricultural industry as a whole maintain that the answer to agricultural challenges is, basically, more of the same: more economies of scale, more monoculture, more intensification, more chemical input.”

Even without acute climate shocks - to which agriculture is prone - migration is a very likely reaction to the perfect storm which is brewing. In a high-resolution study from 2018, the World Bank expected 143 million climate induced migrants by 2050. Africa would see 85 million and South Asia over 40 million.

What future for agriculture, for farmers and for natural capital?

Agriculture has intensified massively around the world and pushed towards and beyond planetary boundaries regarding phosphorus and nitrogen cycles, conversion of forest and biodiversity loss as well as pesticide use. In spite of this high-input agriculture, some of the world´s best soils are being depleted, and farmers´ incomes lag well behind the rest of society.

Seemingly blind to these facts, some experts and the agricultural industry as a whole maintain that the answer to agricultural challenges is, basically, more of the same: more economies of scale, more monoculture, more intensification, more chemical input. This story has never looked desirable. Increasingly, it looks completely implausible.

Our current agricultural and food systems shortchange farmers and nature. Current markets force farmers to destroy the land and much of the biodiversity on which they ultimately depend in order to make a living. Per unit area, smallholders are already more productive than supposedly modern farmers. There is mounting evidence that their production systems can evolve to feed the world and preserve its natural capital.

But this change is urgently needed. Low food prices ruin farmers and induce waste. The structure of small and diverse holdings needed for an agriculture that works with nature, rather than against it, is being lost rapidly and irreversibly.

Can steel ever be green?

Steelmakers are starting to embrace sustainable production. But if we're serious about decarbonisation, do we need alternatives?

Small business and COVID - an engine of recovery 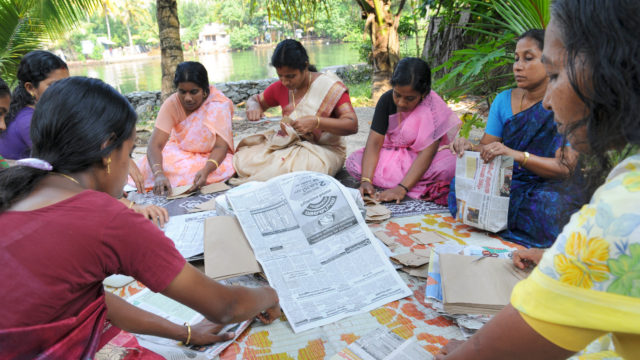 Skills and training in new green technology are essential for a truely green economic transition, argues the GEC's Najma Mohamed.