Add your name
Add your name: The People's Accord towards a New Social Contract
The moment for rebuilding the social contract is here: a call to restore trust and build solidarity
Learn more
Tackling Inequality
By Ben Martin GEC · 22nd March, 2019

The Gilet Jaune protests in France are a visible – and violent – symbol of a general malaise that has spread to many Western democracies: a gulf of understanding between governing elites and disaffected voters. Many outside of France have characterised this organic street movement as fundamentally anti-environmental, a popular rejection of French President Macron’s climate and green energy policies. But, as the protests enter their 20th consecutive week of action, it's becoming increasing clear that this is a fundamental misunderstanding of the causes of public anger.

It’s true that two of the triggers that sparked the initial protests back in November 2018 were a proposed increase in fuel tax, and a new lower speed limit on motorways – both presented by the Macron government as necessary measures for France’s “ecological transition”. A narrative quickly took hold in the press that painted the movement as reactionary rural bumpkins, addicted to fossil fuels and fast driving.

Rage against the Macron

But this is a glib and patronising oversimplification. A list of gilet jaunes demands drawn up in November called for big hikes in taxes on aviation and maritime fuel, as well as mandatory building insulation, to tackle climate change.

Priscillia Ludovsky, the creator of the first fuel tax petition which kickstarted the protests, has joined green campaigners to call for higher penalties for industrial pollution and government support for organic produce. National opinion surveys have consistently found consistent and strong concern over climate change amongst the low-paid sectors that make up the bulk of the movement.1 And gilet jaunes were out in force last weekend as part of Paris’ largest ever climate march, part of a new global wave of green protests.

“ The gilets jaunes protestors are a powerful symbol of why social justice must always be at the heart of environmental justice. Green policies must also address equality – or they will be rejected.”

It’s clear that the gilet jaunes are not reflexively anti-green. In fact, they’re motivated mainly by outrage at the economic injustices and inequality of modern France, as well as personal antipathy to Macron, whose post-election fall from grace has left him a symbol of the out-of-touch urban elite.

Their opposition to the fuel tax was driven, at least in part, by how regressive it is. France is a large country, with a dispersed rural population. Wealth and employment tends to be concentrated in cities, leaving a struggling countryside hit hard by recession and globalisation.

In this context, a flat fuel tax overwhelmingly hurts struggling middle & lower classes in rural areas, while the benefits of lower air pollution would mainly be felt by city-dwellers. The majority of gilet jaunes protestors come from a world of insecure employment, rural poverty, and increasing inequality. It’s not hard to see why the fuel tax became the straw which broke the camel’s back.

At its core, the gilet jaunes movement is not a rejection of green policies per se, but a rejection of economic inequality, between rich & poor, urban & rural, globalised cities vs marginalised regions. They are deeply engaged with climate change and environmental protection, but ask the question – forcefully, repeatedly, and entirely reasonably – that since it is the high-carbon lifestyles of the rich elites that are creating the problem, why should the costs of climate action fall mostly on the poor?

Writing in the London Review of Books, Jeremy Harding identified a powerful feeling of disgust at the hypocrisy and immorality of excessive wealth among the largely working-class gilet jaunes. “The humiliation felt by underpaid people when they hear about disproportionately high incomes is not about to disappear. Excess at the top is felt as a slight… There is no code that protects the low-paid against the endless taunting to which they’re subjected by news of lunatic salaries and bankers’ bonuses. They feel outcast.”

The gilets jaunes protestors are a powerful symbol of why social justice must always be at the heart of environmental justice. Green policies must also address equality – or they will be rejected. We call it “Green Must Be Fair”, and it’s been a central plank of our work on the green economy since our inception.

Around the world, large majorities of citizens are concerned about climate change and want to see action taken by their governments. But they want that action to benefit everyone, not just elites, and they want the costs of that action to fall equitably on the shoulders of those most responsible.

The people have spoken. Who will listen?

Indeed, the protests have continued long after Macron abandoned the planned fuel price hike back in December. Social and economic justice remain core issues, with calls for better care for the elderly, stronger rent controls, an increased minimum wage and state pension, and a maximum salary cap of €15,000 per month – well above the total annual minimum wage earned by many in the movement.

Another key GJ demand is for a ‘Référendum d’initiative citoyenne’ (RIC) – a mechanism by which laws can be proposed by the public for consideration in the National Assembly. In response, Macron launched a grand “national conversation”, a months-long open-source deliberative democracy platform which allowed citizens to organise local meetings to raise issues & discuss whatever they like, with their grievances recorded and relayed to the government.

Although the gilet jaunes claim to have boycotted the process, the national conversation has surprisingly successful, with well over 10,000 meetings organised and 1 million respondents to a detailed national questionnaire on the future of the country.

Many have dismissed this attempt at deliberative democracy as a mere smokescreen from Macron, whose approval ratings remain dire. But it has given a platform and a voice to citizens who too often feel cut off from their government. Unsurprisingly, social and economic justice have emerged as consistent themes, with broad secondary support for carbon taxes and green economy also apparent.

It remains to be seen how responsive the Macron government will be to the findings of this new national debate. But as the protests on the Champs-Élysées become increasingly impossible to ignore, one thing is clear: a green economy must be a fair economy first. 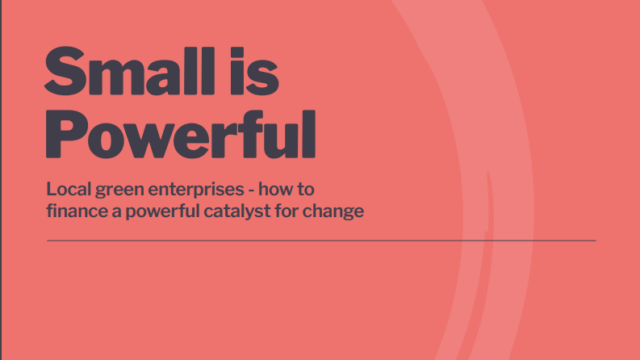